Well-off professionals in costly areas of the U.S., such as New York and California, are set to get a windfall from competing plans by Congressional Democrats to change the deduction limit for state and local taxes.

Americans with six-figure salaries and high property and state income tax bills will see the most noticeable effects from lifting the $10,000 SALT cap, according to an analysis by accounting firm Marcum conducted for Bloomberg News.

Democrats are deciding between at least two proposals to tweak the limit imposed by the 2017 tax law signed by former President Donald Trump.

The reconciliation bill under consideration by the House of Representatives would allow all taxpayers – including the superrich – to deduct up to $80,000 of SALT.

“This fix will put money back in the pockets of hardworking, middle-class families in our districts and help ensure that our local communities can continue making the investments that we need,” Representatives Tom Suozzi of New York and Mikie Sherrill and Josh Gottheimer of New Jersey said in a statement.

In the Senate, Vermont’s Bernie Sanders and New Jersey Senator Bob Menendez have proposed limiting the benefits of raising the SALT cap to non-wealthy households. Those earning less than a still-to-be-decided amount would still be eligible for an unlimited SALT deduction. A threshold of $400,000 was floated earlier this month, but Menendez said the income limit could be as much as $500,000.

The practical impact of each proposal would vary widely based on where a taxpayer lives, what they pay in property taxes and how many other deductions they claim, including for mortgage interest and charitable donations.

Middle-income taxpayers with substantial state and local tax bills could reap benefits from both plans. Marcum analyzed a married couple in the New York suburbs that earn $150,000, have a $400,000 mortgage and pay $10,000 in property taxes and $2,500 in charitable donations per year. Either approach would let them deduct their full SALT bill of almost $18,000, saving them $1,743 and lowering their overall tax rate by 1 percentage point. 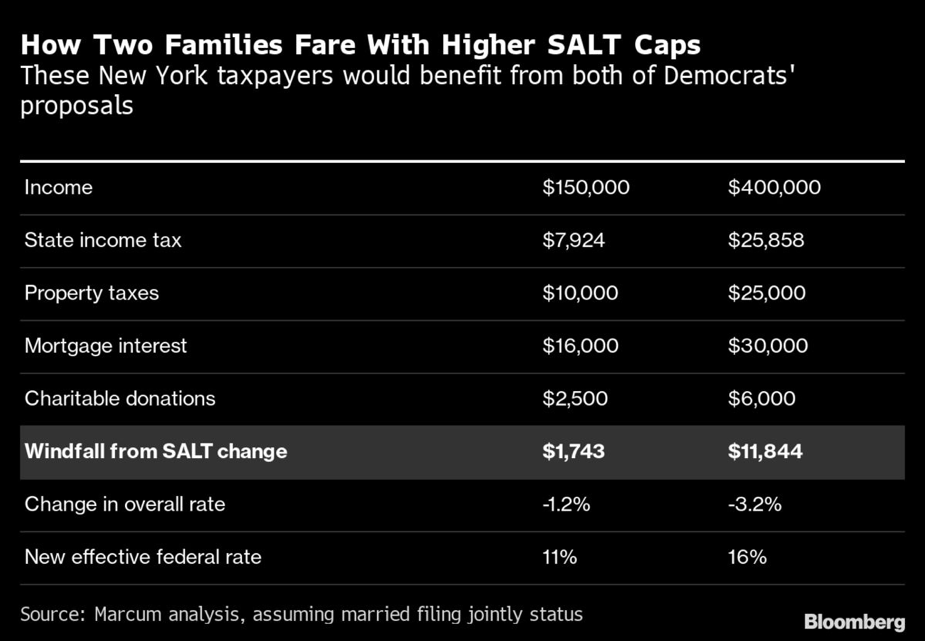 For a couple earning $400,000, the benefits are much larger, both in dollars and as a share of income. Marcum assumed this couple, also in a New York suburb, would owe $25,000 in annual property taxes, deduct interest on a $750,000 mortgage and give $6,000 to charity each year. They would be able to deduct more than $50,000 in SALT expenses on their federal returns under both proposals, saving almost $12,000, or a 3-point drop in their overall tax rate.

A family with the same expenses but $600,000 in income, meanwhile, would also get a roughly 3-point tax cut, this time delivering $19,251 in savings. Those savings probably wouldn’t be available under the Senate proposal, assuming it phases out for earners at that level.

Sanders said Tuesday his goal is a “proposal that protects the middle class, but does not end up with an overall reconciliation bill in which millionaires are better off tax-wise than they were under Trump.” He clarified the proposal would still allow rich taxpayers to deduct $10,000 in SALT as they can under current law.

After months of negotiations, Democrats have dramatically scaled back President Joe Biden’s proposals to hike taxes on the wealthy and corporations. And, largely as a result of its $80,000 SALT cap, the House reconciliation bill would ultimately give a tax cut to most of the top 1%, according to an estimate released Nov. 11 by the Tax Policy Center.

Taxes would still rise overall on the super-wealthy, thanks to measures such as a new 5% surtax on incomes in excess of $10 million, and an additional 3% on incomes more than $25 million.

However, the bill’s tax increases hit an exceedingly thin slice of the population: Just 0.2% of all taxpayers will pay more in income levies, according to the Tax Policy Center. Only about a fifth of those earning more than $1 million will owe more, the Washington-based think tank estimates, while 70% of these millionaires will get a tax cut.

For the super-rich, however, these tax cuts are likely to be so small they’ll barely be noticeable. Marcum analyzed a married couple with $35 million in ordinary income, and found their overall tax rate – including the new surtax – would be around 42% no matter which SALT cap Democrats adopt.

“It gives some benefit to the wealthy, but it’s a negligible benefit,” said Ronald Finkelstein, a tax partner at Marcum who helps lead its national trusts and estates practice group. The alternative minimum tax, or AMT, will also limit the SALT advantage for some of these taxpayers, he said. 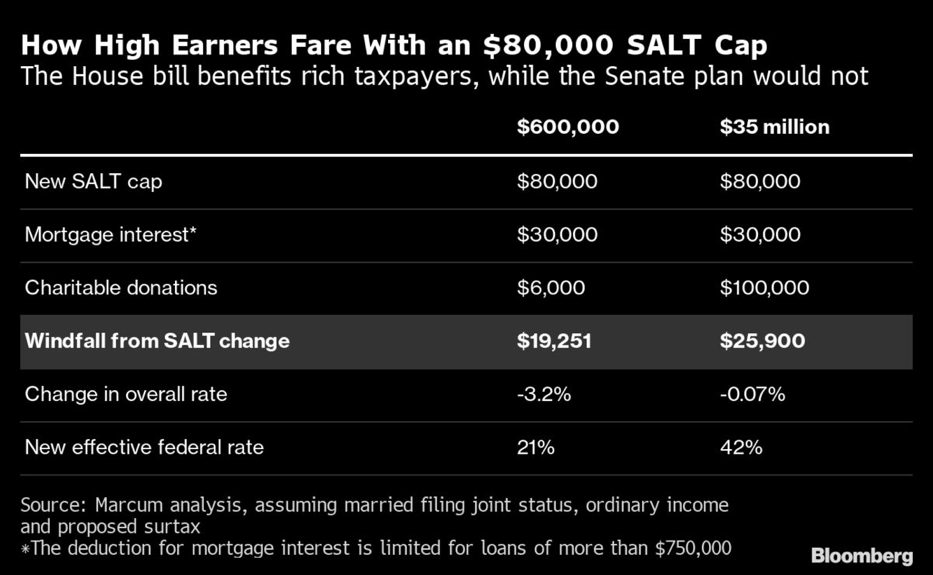 Even if the benefits of the SALT change are relatively small for the super-wealthy, it opens Democrats up to criticism from both the left and right.

“The occupants of the penthouse are getting a bundle, but the building janitor gets nothing,” Representative Kevin Brady of Texas, the top Republican on the House Ways and Means Committee, told reporters Tuesday.

Lower-income taxpayers will benefit financially from other provisions in the reconciliation bill, including an extension of a more generous child tax credit. But they’ll generally get nothing from a higher SALT cap because they’re likely to take the standard deduction, which is $25,100 for married couples, rather than itemize their SALT, mortgage, charitable and other deductions.

A larger SALT deduction would provide the least benefit to people who live in states like Florida, Texas and Nevada without state income taxes, Finkelstein noted. But even these taxpayers would save money if they’re paying high real estate taxes.

The upshot of either SALT plan is that more taxpayers are likely to itemize their deductions. That could have an effect on charitable donations. Because non-itemizers can’t fully deduct their donations to charity, advisers including Finkelstein often tell clients to save up and make multiple donations in one calendar year so their deductions exceed the standard amount.

“We’ve had to get more creative about bunching charitable deductions together,” said Matt Masterson, a partner at New Jersey-based advisory firm RegentAtlantic. If the SALT cap rises, “you don’t have to be so tactical about your deductions.”

This information is provided by LVW Advisors for general information and educational purposes based upon publicly available information from sources believed to be reliable – LVW Advisors cannot assure the accuracy or completeness of these materials. Any opinions expressed herein do not necessarily reflect the views of LVW Advisors. This information may change at any time and without notice. Past performance is not a guarantee of future returns. 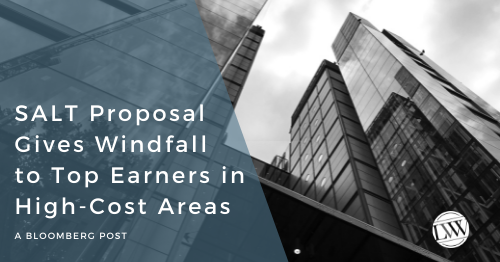