2018 has been a tumultuous year for investors. As of December 21st, the S&P 500 just wrapped up its worst week since 2008, is on pace for its worst month since 2008 and is down 17% in the last 65 trading days. It’s on pace to be the worst December since 1931. The Russell 2000 Small-cap Index is in bear market territory and having its worst quarter in history. On December 21st every stock in the Nasdaq 100 was down. On the same day over 1000 stocks on the NYSE hit a new 52-week low. Carnage is everywhere – blood is in the streets. One thing is as sure as Newton’s Law of Gravity: the Pavlovian reaction of greed and fear among investors. Panic is setting in. Human nature is a constant. Perhaps we should just breathe.

Twenty-five hundred years ago, Siddhartha Gautama practiced a form of meditation that involved controlled breathing. Much later, about 700 years ago, this practice, called pranayama, was codified in the most famous of Hindu texts, the Bhagavad Gita. More recently, Western science has validated the physiological benefits of pranayama. Respiratory functions are improved, cardiovascular system is enhanced, (increases heart rate variability, decreases blood pressure, etc.), and the autonomic nervous system also benefits.

The survival instinct is genetically encoded in humans. When we see sudden movement in front of us, we react with common physiological features: rapid heartbeat; surge of adrenaline; and increased neurological activity to assess the danger and determine whether to flee or fight. It could just be a bird in the thrush, but it might be a hungry bear. This year-to-date chart of the S&P 500 Index indicates that investors see a bear in the bush, and not a bird, and are fleeing from this potential danger.

But stepping back for a better view, over the past 90 years we see a different pattern (see graph below, in semi-log scale). Markets move through cycles, and there are long periods, even decades, of consolidation (no firm direction) and periods of advance. It’s important to note, although harder to appreciate with this semi-log scale, that many of the wiggles, during both periods of consolidation and advancement, represent large percentage swings. I’ve only lived through (consciously) about a third of the period below, but I know first-hand that each of these declines feels terrible. The loss on paper is bad, but the uncertainty of where the bottom is, or if one exists, and when we will get there, is worse.

Michael Batnick, the author of “Big Mistakes: The Best Investors and their Worst Investments,” provided this historical context: “Yesterday was the third worst point
decline for the Dow since 1915. But it was only the 284th worst day on a percentage basis. A Black Monday (1987) type of event would have whacked nearly 6,000 points off the index.”

Or as Barron’s wryly noted in a headline: “The Dow drops 412 points because everybody is afraid of something.” Perhaps a bear in the woods?

To be fair, as we have learned from our own clients, part of this can be reduced to ‘what has the market done for me lately’. It’s a good point because after a buoyant 2017, 2018 has been a party pooper. By any measure, 2017 was phenomenal as all asset classes were at positive performance level.

I reminded investors at the beginning of 2018 that 2017 would likely be the easiest year to make money in the financial markets in their lifetime. It was enjoyable and easy to be an investor in 2017. This often breeds complacency and “recency bias” as we come to believe the past can be extrapolated into the future.

If stocks are entering a bear market, they likely have a ways to go before they hit bottom. The decline is jarring because of the speed with which it’s happening, and while it hurts, there is a difference between pain and trauma. We ain’t seen nothing yet. Over the past century the average bear market lasts 400 days with an average decline of 38%. “There are things that matter over the long-term that are completely meaningless in the short-term. Valuations are a good example; Buyers didn’t care on the way up and sellers won’t care on the way down. It’s easy to get caught up in narratives and stories but nobody knows why stocks are going down and nobody knows when this is going to turn around.

It was a decade ago when the economy crashed like a house of cards and everybody was afraid of something and for a good reason. Nobody knew which big bank would be the next to fall or if the domestic auto industry would survive or if the job loss figures would stop at one million a month. The economic recovery that began in June 2009 will be the longest in American history if it lasts into mid-2019. We have virtually full employment, markets have been overall stable and business confidence is high. But history tells us that downturns happen when economies are strong, and the fault lines of a downturn are opaque.

The table below shows peak to trough returns for every bear market dating back to 1900: 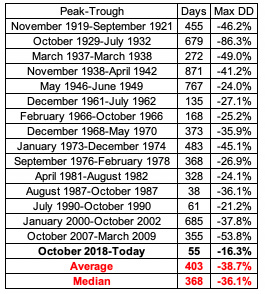 Consider this completely counter-intuitive data produced by Josh Brown of the Reformed Broker. The Standard & Poor’s 500 annualized price returns by employment rate since 1948:

How can we make any sense of the above data? Here is how: markets are discounting mechanisms and the greatest opportunities exist during the worst of times: when investors are scared and more pessimistic about the future. I grow increasingly annoyed when the talking heads in the media continue to repeat the strong economic numbers as the reason the market should not be going down.

We believe that as bad as fear can be, complacency can be equally corrosive because it sets expectations that are unreal. People are blasé psychologically, and unprepared for the jolts that can come with a complex economy in which we live.

At times like these, it’s worth listening to the blunt reminder of Oaktree Capital’s Howard Marks: despite all the noise to the contrary, investing is not easy. “Everyone wants to make money. It’s a very competitive activity,” Marks recently told Barron’s: “But one of the keys is to keep your emotions under control. Everything in the environment conspires to make us do the wrong thing, to buy when things are going well, and prices are high and to sell when things are going poorly, and prices are lower, which is the exact opposite of what we should do. But it all comes from emotion. We have to resist.”

Psychology and behavioral coaching are critical parts of our job: to offer the best of analytical tools and understand the risk tolerances of our clients; to help them mentally and financially prepare for the unknowable by offering reasoned; factual counsel and historical context. In short, to help them resist the temptation of unintentional failure.

So what now? No one knows. But lots of damage has been done in the markets, the economy is still decent, and rarely do markets continue with the relentless selling as we have experienced this quarter. As the chart below illustrates, the market usually rebounds in the subsequent quarters. 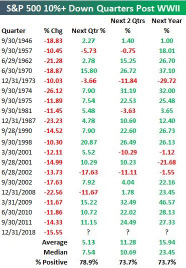 But with the right perspective, we can begin to see market declines as opportunities rather than as cause for panic. The rattling in the bush may be a bear, or just a bird, or even just the wind. Let’s address that with a clear head and a calm heart. Just Breathe.

Sources other than noted in body of text:

Disclaimer: This report is provided for informational purposes only. Investing involves risk, including the potential loss of principal. Past performance may not be indicative of future results, as there can be no assurance that the views and opinions expressed herein will come to pass. No portion of this commentary is to be construed as a solicitation to effect a transaction in securities, or the provision of personalized tax or investment advice. Certain of the information contained in this report is derived from sources that LVW Advisors, LLC (“LVW” or the “Firm”) believes to be reliable; however, the Firm does not guarantee the accuracy or timeliness of such information and assumes no liability for any resulting damages. Any reference to a market index is included for illustrative purposes only, as an index is not a security in which an investment can be made. Indices are unmanaged vehicles that serve as market indicators and do not account for the deduction of management fees and/or transaction costs generally associated with investable products.

LVW is an SEC-registered investment advisor that maintains a principal office in the state of New York. This registration does not constitute an endorsement of the firm by the Commission nor does it indicate that the adviser has attained a particular level of skill or ability. The awards recognition and the due-diligence process conducted are not indicative of the advisor’s future performance. Portfolio performance is not a criteria due to varying client objectives and lack of audited data. Neither Barron’s nor the firm receive a fee in exchange for rankings. The Firm may transact business only in those states in which it has filed notice or qualifies for a corresponding exception from applicable notice filing requirements. Additional information about LVW is contained in the Firm’s Form ADV disclosure documents, the most recent versions of which are available on the SEC’s Investment Adviser Public Disclosure website, www.adviserinfo.sec.gov.