This excellent interview with legendary economist and writer Jim Grant challenges the idea that our Federal Reserve has control over inflation.  After nearly 40 years of low and falling interest rates, most market participants have never experienced inflation.

The Fed is under the misconception that it controls events, according to James Grant. It is overconfident in its belief it can accurately calibrate and attain a 2% inflation target.

Grant spoke via a webcast sponsored by State Street SPDR ETFs. The title of his talk was, “Inflation and Interest Rates: Impact on the Market and Gold.” Grant is the founder and editor of Grant’s Interest Rate Observer.

He mused that inflation is a “state of mind” based on the interaction of monetary policy and the real economy. But he was emphatic that inflation is a genuine threat for U.S. investors. There is a “gale” of inflation of “all kinds” in progress, he said. Inflation is “clear and present and will manifest itself in our everyday lives,” Grant said, unlike the past 12 years of low inflation and even deflation.

“It will catch the Fed backfooted,” Grant said. In response, the Fed will “prevaricate” and make excuses.

Part of the Fed’s difficulty is because inflation is difficult to measure, according to Grant. Consider the toothbrush in its legacy and electric forms. How do you adjust for the clear quality improvement of electric toothbrushes? The hedonics used by the government to measure inflation are “inexact and not really a science,” he said. Can the Fed arrest rising inflation? The Fed wants to retain control of the markets, he said. It has intervened to promote smooth market functioning after sudden, down equity markets. It will act if inflation rises. The economy can tolerate only 2.5% real rates, according to Grant. If that is breached, the Fed will resort to yield-curve control or even selling bonds (which will drive yields higher).

Central banks, including the Fed, are highly manipulative in their actions and intentions. They want us to know that they are there for us in times of difficulty, he said. That attitude has engendered a level of confidence among investors that is reflected in the level of margin debt, cryptocurrency activity, excessive multiples of revenue and earnings for stocks, and negative-yielding bonds.

“These are strange and oppressive markers of financial markets that have lost moorings of valuation,” Grant said.

The forces of deflation – like globalization of the labor force – are waning or spent, according to Grant. Monetary and fiscal excesses and the lack of concern for them are the greatest inflationary threats. The Fed recently redefined its methodology for calculating the M1 money supply to broaden what it includes. M1 annual growth is 350%; M2 is growing at approximately 28%. “Never before have we had monetary peacetime growth this fast,” Grant said “Tell me who cares,” he asked rhetorically. The Fed is “un-self-aware,” Grant said. Despite Jay Powell’s credentials, “he knows nothing about the past and believes he knows everything about the future.” He criticized Powell for comparing gold to bitcoin, because, according to Grant, gold was once money, as was the case in 18th century Britain and for hundreds of years prior to that. “The chairman of our Federal Reserve board knows nothing about what preceded the era of fiat currency,” Grant said.

Where should investors look in an inflationary environment? Favor businesses with pricing power that can improve their margins if inflation arises. TIPS are fine, Grant said, except they are denominated in dollars and rigged to our government’s definition of inflation. Gold is not exactly an inflation hedge, he said, but it is an investment in “monetary disorder, which is what we have.”

“If I am right, there will be a world that will want tangible monetary stability because it loses confidence in central banks,” Grant said. “When the cycles turn, people will want gold and silver. When people consider the shortcomings of the Fed, they will turn to gold.”

Fiscal policies are behind the specter of inflation. Citing an essay by John Cochrane, Grant said that inflation is not a product of economic “slack” or of money supply growth. “It is the fiscal breakdown of the state,” he said. Deficits must matter if the solvency of a government is dependent on the confidence of its creditors in rolling over their debt. That speaks indirectly to fiscal solvency and the cost of borrowing, according to Grant.

“The market’s indifference to our deficit is a red flag.” This speaks to something being “really wrong,” he said.

As for portfolio construction, Grant said the fixed-income market offers unattractive reinvestment rates and excessive leverage, making bonds “problematic.” That drives the opportunity for gold and gold-mining equities. The spread between the gold bullion price and the gold-mining index is historically wide, he said, making mining companies compelling bargains.

Grant did not endorse bitcoin or other cryptocurrencies. Money is a social convention, he said, and “more than that if government is behind it.” People say there is something behind bitcoin, he said, but “bitcoin is not money. It is an expression of the world’s rejection of fiat currencies.” Perhaps it has a future, according to Grant, but it lacks respectability.

Don’t forget the lessons of 1984, Grant said, when one could have locked in 14% riskfree yields on long-term, zero-coupon Treasury bonds. Too many investors missed that opportunity because they were numbed by the “muscle memory” of rising yields. Today’s muscle memory, for Grant, is the unbridled faith in central banks and their ability to forestall or control inflation.

This information is provided by LVW Advisors for general information and educational purposes based upon publicly available information from sources believed to be reliable – LVW Advisors cannot assure the accuracy or completeness of these materials. Any opinions expressed herein do not necessarily reflect the views of LVW Advisors. This information may change at any time and without notice. Past performance is not a guarantee of future returns. 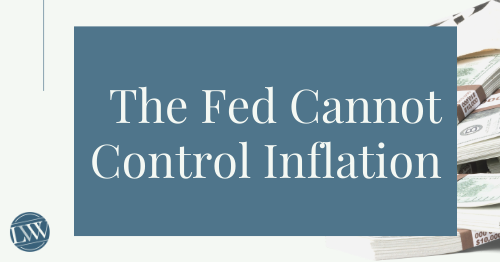