Is the Stock Market Cheap? You be the Judge

A standard way to investigate market valuation is to study the historic Price-to-Earnings (P/E) ratio using reported earnings for the trailing twelve months (TTM). Proponents of this approach ignore forward estimates because they are often based on wishful thinking, erroneous assumptions, and analyst bias.

The average P/E ratio since the 1870’s has been about 16.8. But the disconnect between price and TTM earnings during much of 2009 was so extreme that the P/E ratio was in triple digits — as high as the 120s — in the Spring of 2009. In 1999, a few months before the top of the Tech Bubble, the conventional P/E ratio hit 34. It peaked close to 47 two years after the market topped out.

As these examples illustrate, in times of critical importance, the conventional P/E ratio often lags the index to the point of being useless as a value indicator. “Why the lag?” you may wonder. “How can the P/E be at a record high after the price has fallen so far?” The explanation is simple. Earnings fell faster than price. In fact, the negative earnings of 2008 Q4 (-$23.25) is something that had never happened before in the history of the S&P 500.

The P/E10 Ratio – A Better Way to Measure Valuation

Legendary economist and value investor Benjamin Graham noticed the same bizarre P/E behavior during the Roaring Twenties and subsequent market crash. Graham collaborated with David Dodd to devise a more accurate way to calculate the market’s value, which they discussed in their 1934 classic book, Security Analysis. They attributed the illogical P/E ratios to temporary and sometimes extreme fluctuations in the business cycle. Their solution was to divide the price by a multi-year average of earnings and suggested 5, 7 or 10-years. In recent years, Yale professor and Nobel laureate Robert Shiller, the author of Irrational Exuberance, has popularized the concept to a wider audience of investors and has selected the 10-year average of “real” (inflation-adjusted) earnings as the denominator. Shiller refers to this ratio as the Cyclically Adjusted Price Earnings Ratio, abbreviated as CAPE, or the more precise P/E10, which is our preferred abbreviation.

The Correlation between Stocks and Their P/E10

As the chart below illustrates, the P/E10 closely tracks the real (inflation-adjusted) price of the S&P Composite. In fact, the detrended correlation between the two since 1881, the year when the first decade of average earnings is available, is 0.9977. (Note: A perfect positive correlation would be 1 and the absence of correlation would be 0).

Of course, the historic P/E10 has never flat-lined on the average. On the contrary, over the long haul it swings dramatically between the over- and under-valued ranges. If we look at the major peaks and troughs in the P/E10, we see that the high during the Tech Bubble was the all-time high above 44 in December 1999. The 1929 high of 32.6 comes in at a distant second. The secular bottoms in 1921, 1932, 1942 and 1982 saw P/E10 ratios in the single digits.

Where does the current valuation put us?

For a more precise view of how today’s P/E10 relates to the past, our chart includes horizontal bands to divide the monthly valuations into quintiles — five groups, each with 20% of the total. Ratios in the top 20% suggest a highly overvalued market, the bottom 20% a highly undervalued market. What can we learn from this analysis? The Financial Crisis of 2008 triggered an accelerated decline toward value territory, with the ratio dropping to the upper second quintile (from the bottom) in March 2009. The price rebound since the 2009 low pushed the ratio back into the top quintile, hovered around that boundary and has now moved higher.

A cautionary observation is that when the P/E10 has fallen from the top to the second quintile, it has eventually declined to the lowest quintile and bottomed in single digits. Based on the latest 10-year earnings average, to reach a P/E10 in the high single digits would require an S&P 500 price decline below 900. Of course, a happier alternative would be for corporate earnings to continue their strong and prolonged surge. If the 2009 trough was not a P/E10 bottom, when might we see it occur? These secular declines have ranged in length from over 19 years to as few as three.

We can also use a percentile analysis to put today’s market valuation in the historical context. As the chart below illustrates, latest P/E10 ratio is approximately at about the 95th percentile of this series.

Deviation from the Mean

Here is a pair of charts illustrating the historic P/E 10 ratio from its mean (average) and geometric mean with callouts for peaks and troughs along with the latest values.

Relative to the mean, the market remains quite expensive, with the ratio approximately 72% above its arithmetic mean and 86% above its geometric mean.

This work confirms that based on a long-term, reliable indicator of valuation, PE10, the current stock market is the third most expensive in history behind only 1929 and 1999, just prior to major bear markets. 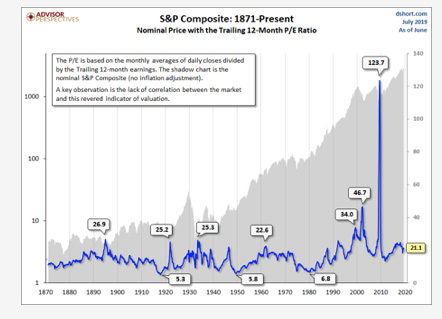